Ségur between the 19the and the 20th centuries

This video has an early 20th century atmosphere to it, with a series of archive images presenting old trades, activities and everyday life in Ségur. You’ll also discover the town’s mills and old bridges.

After the Appeals court closed in 1750, Ségur’s economic activity decreased considerably. However, up until 1950, there were still about 50 artisans and shopkeepers in Ségur : butchers, bakers and innkeepers, as well as trades that no longer exist, such as wheelwrights, who used to make and strap cartwheels, and sand sweepers, who collected high quality sand from the bottom of the river Auvézère using flat-bottomed boats.

As it is often the case, everday life was organized according to the different seasons: threshing in summer, sheep shearing in spring, basket-making in winter… An annual tribute to these trades began taking place in Ségur in 1976.

The river Auvézère supplied water to 3 mills in Ségur, and produced flour for local bakers and apple juice for cider-making.

In 1907, Saint Laurent mill, in the centre of town, became a 4-level flourmill, equipped with elaborate grinding and sifting devices.

In 1924, thanks to donations from inhabitants, Richard mill, which was located upstream, was equipped with a hydroelectric turbine. It started out by supplying power to the town’s lampposts until 1930, which was a first back then ! People from neighbouring villages would gather in Ségur after dark to « see » electricity !

The medieval Notre-Dame and Saint-Laurent stone bridges, stood the test of time for many centuries, but were destroyed by a great flood in 1913. They were replaced by larger and more modern concrete bridges, which were fit for supporting the weight of cars.

Nowadays, Ségur’s mills are no longer in activity and most of the town’s shops are closed. However, the heart of Ségur still beats thanks to tourism. 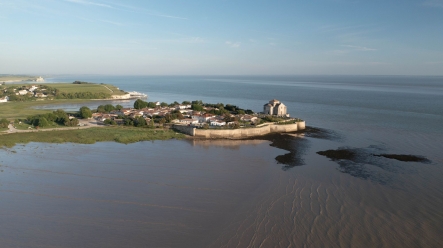 The natural evolution of the estuary's landscape 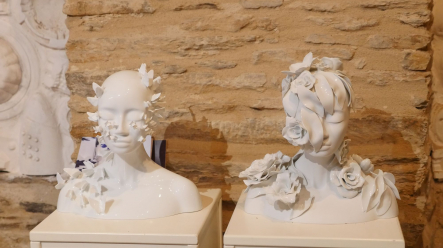 Porcelain
Thematic
Activities and landscape
See all the steps