This sequence presents the different types of building material used in Ségur-le-Château. Discover the town’s fountains and associated beliefs.

You may have noticed that several types of material were used to build the town of Ségur. The main types of stone used here are gneiss and schist, from Saint Yrieix la Perche and dorite, from Saint Julien le Vendomois. However, several decorative elements such a window frames are made of limestone from the nearby Dordogne area. Red sandstone, much like the stone in Collonges la Rouge – in southern Corrèze, can also be found occasionally on buildings in Ségur. The red sandstone in Ségur comes from the nearby town of Juillac.

The roofs in the village are mainly made of slate, from Corrèze. Sometimes, the slate tiles are sculpted into different geometric shapes. There are also numerous roof ornaments made of ceramic or zinc, which embellish many of Ségur’s roofs.

There are six fountains in Ségur. Richard fountain, in the lower part of town, can be reached via a footpath upon the river Auvézère. Further up, behind the church, Nègrerie fountain supplies water to a public washhouse, as does Saint Anne fountain, located at the top of “ruelle de l'aumônière” lane. St Anne is said to be a healing fountain and there used to be an adjoining chapel, which probably explains the presence of this 15th century limestone statue of St Anne, Virgin Mary and Jesus as a child.

The cult of St Anne was associated with the cult of saint Médard here in Ségur. Legend even has it that the two were lovers. He was the patron saint of the Beyssenac parish church, which this portion of Ségur was part of. Each year, the inhabitants organized a procession on Saint Médard day. They’d depart from the church in Beyssenac, carrying the statue of the saint. They would stop over at St Anne fountain, to bring the two lovers together, then would walk down to the village of Ségur and immerse the statue into the river Auvézère. Supposedly, they would do this to induce rainfall. St Anne fountain was also said to heal aches and pains. 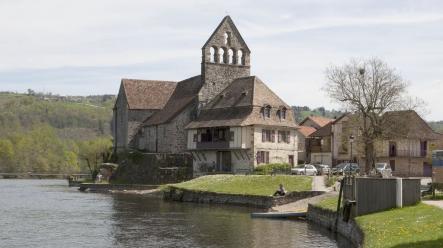 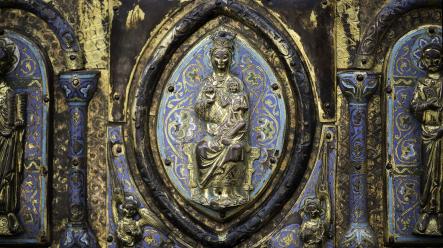