This tower is the castle’s best preserved element. This sequence explains its defensive purpose and describes how the interior was organized.

The southwest tower is elliptic-shaped and is Les Cars castle’s most well-preserved tower. It is part of the defense plans made by François des Cars, in the second half of the 16th century, during the religion wars. It was built above a small square artillery tower, itself built just 10 years earlier. Part of the first construction, the shooting room, located on the first floor, was preserved and transformed into stoves. The elliptical tower encircles it, around a hallway called « gaine de tir” (which means “shooting sheath”).

The elliptical tower was mainly used for artillery. It has 16 openings to shoot from, called “couleuvrinières”. They are named after small portable canons called « couleuvrines”. What makes this tower special is that its « couleuvrinières » have double openings, which enlarge the shooting angle without weakening the building’s structure.

The ground floor and other floors are not adjoining. The floors above ground level used to overlook the residence directly. Since the residence no longer exists, a wooden stairway was built outdoors to give access to door on the first. Inside, there is a room with two bay windows. Beneath these openings, there are two « couleuvrinières ». A spiral wooden staircase leads to the second floor, with a room identical to the one on the first floor. There are traces of ochre circles painted on the wall.
The stairway leads up to the third floor and its artillery platform. Its circular shape was convenient for pointing canons in different directions.
There were machicolations on the top of the tower. You can still see a few traces of these today. 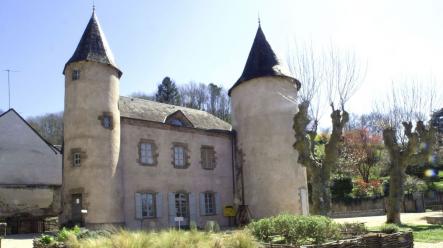