This video explains the evolution of the defense system located at the castle entrance : see how a simple wooden doorway became a true fortified castle entrance from the 14th to the 16th century.

The castle of Les Cars changed appearances several times before resembling the late 16th century fortress that can be seen on today’s reproduction. Archaeological excavations enabled searchers to identify certain parts of the old building, particularly a piece of the primitive castle’s doorway. Thus, we know that in the 13th and 14th centuries, the castle’s entryway was closed by a simple wooden door without a portcullis. A footbridge was used to cross the small ditch.

In the late 14th century, the One Hundred Years War context probably made it necessary to reinforce the castle’s defense system. A loophole was built. Its walls were 3 metres high and it enabled the castle’s occupant to stand safely before the door and guard the entrance without being wounded. There was probably a drawbridge as well.

In the second half of the 16th century, François des Cars and the King of France took part in a war against the Protestants. François des Cars’s grandfather, Geoffroy de Pérusse, had turned the castle into a simple residence. In order to protect it, François des Cars had some extra work done on it. The ditch was enlarged and equipped with a special defense bridge which supported the drawbridge.
The loophole itself became a small defensive castle with two towers: one on either of its sides. You can still see the tower foundations today : one is located on the outside and the other can be found under the town hall building. The towers were specially designed to withstand attacks. The front part of their cylindric bases were reinforced by a prominent angle called a « spur ».

A 17th century drawing gives us a good idea of what this part of the castle, which no longer exists, actually looked like. 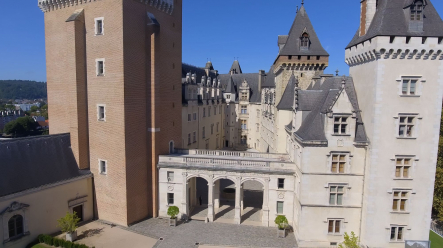 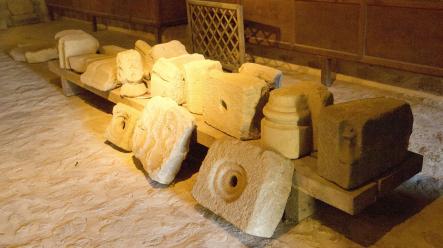