This chapel, which used to be the parish church, also belonged to the Blue Penitents Fraternity. This video explains the history of the chapel and its numerous artworks.

The Penitents chapel used to be Beaulieu’s old parish church and was called « Notre-Dame du Port-Haut » (Our Lady of the Upper Port). It was built in the 12th century upon a rocky spur. It has a remarkable 4 bay bell wall, and its style is purely Romanesque with a unique nave, circular apse and two apsidioles.
It was damaged during the Hundred Years’ War, then restored from 1477 when its 4 lateral chapels were added on.
The nation sold it during the French Revolution then offered it to a priest from the « Pénitents Bleus” fraternity, in 1822. This fraternity was founded in the 17th century during the Catholic Counter Reform, and its mission was to fight against Protestantism, which dominated in Beaulieu, by using religion in an ostentatious and intense manner. The penitents wore blue gowns and hoods and organized imposing processions through the town’s streets. The fraternity declined and ended in the 1870s. Nowadays, the Penitents’ Chapel houses a local history museum with temporary exhibitions. It is open to visitors in summer.
Inside the chapel, there is an « overturned hull » shaped wooden arch above the nave, which is likely to have been built by gabare boat-makers. The penitents ordered its construction in 1820, as well as the tribune with wooden balusters. Two black lines called « funerary litres » were painted on the walls in the 17th or 18th century, in honour of famous figures who had passed away. On these black lines, you can see the family arms of the « Tour d’Auvergne”, the Viscounts of Turenne and of the town’s lords in the 17th century.
The church contains several examples of sacred art, such as the 15th century polychrome stone Pieta sculpture, a 1717 eucharistic cross, several antependia, a 17th century painting of a sculpted cross by Antoine Cibille, and a gabare boat-shaped ex-voto from the same century. 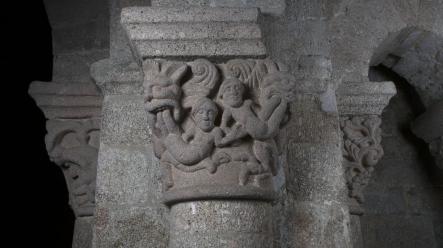 The Romanesque Capitals
Thematic
Religious heritage
See all the steps