Angles-sur-l'Anglin boasts a very unique artisanal skill: Jours d'Angles hemstitch. This is a hemstitch technique which lead to the growth of a sizeable business in this little town during the 19th century. Watch this interview to discover the secrets

Jours embroidery, similar to the hemstitch in English, is the name for a special kind of embroidery using a drawn thread. This means that when leaving the fabric, you pull on the bundle of threads and then take these threads again and refashion them. The threads are drawn in one or two directions. Being a bit more complicated, the specialty of the jours d’Angles technique is to pull the thread in two directions.
Jours embroidery originates from the mid-19th century. It was from then to 1850 that Angles saw significant activity in the manufacture of pleated shirt fronts that required the drawn thread technique. This work was usually carried out by very young women between 10 and 25 years old. During this period, there were 200-250 women working with a workshop, the Berthommier workshop, which took orders and sent its fabrics mainly to Paris.
The second period was the Belle Époque: 1880-1900. The jours embroidery was made by the metre. During this period, the work was carried out by women aged between 20 and 40 years old; from more or less all ages, whereas previously it had been younger people doing the work.
The third period was the peak for jours embroidery, when work was done with a designer who drew the designs to be reproduced on the fabric with motifs of flowers, butterflies or birds, etc. These products were very elaborate. There were tablecloths that could need one, two, or three months of work and these products became luxury items of the time.
There were workshops here in Angles that had direct connections with the department stores of Paris, as was also the case during the Belle Époque.
What remains of jours embroidery is a jours centre that tries to display all the works that were produced over the years. Most importantly, there are still many women who know the technique and use their expertise to create jours embroidery, primarily for their own pleasure.
It is always amazing to see one of these women with a piece of work so precise and so detailed, which required hours and hours leaning over their work. 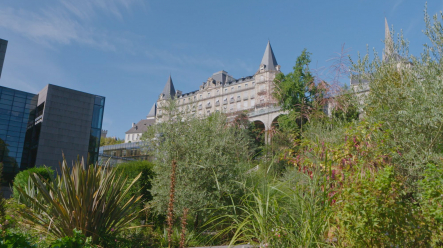 A city of gardens 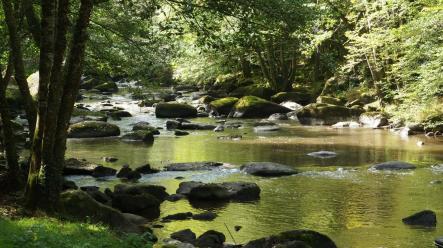 Painting the river
Thematic
Activities and landscape
See all the steps