This 19th-century building replaced the ancient church of the bourg castral, the western doorway of which can still be seen. This audio guide will also tell you about the third church located outside the village.

The current church at Montignac was built to replace the old church of Sainte-Marie du Plô and was intended for residents of the bourg castral. Today only the western stone doorway remains of the former church, which was built in the 14th century. It was laid out at a right angle to the new church and its apse fits into the north-east side of the wall surrounding the village.
Up until the 18th century, there was another church, which today no longer exists, that retained the role of parish church under the patronage of Saint-Pierre-ès-Liens. It was located outside the village on the same bank of the river, around 1.5 km upstream.
In 1730, Saint-Pierre-ès-Liens fell into ruin and an enlarged Sainte-Marie du Plô became the parish church. After falling into ruin itself at the end of the 19th century, Sainte Marie was demolished and replaced by the current church.
The latter has a three-level bell tower that is topped by a polygonal stone dome. The cupolas that cover the nave are decorated with a limestone mixture in alternating whites and greys. 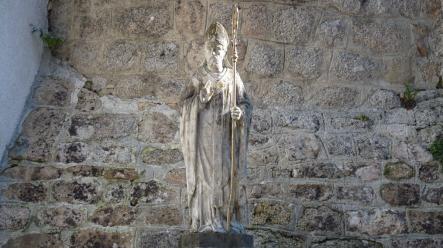