The sculpted decor of the church

Many of the original Romanesque carved decorations have been preserved, not only at the entrance but also on other parts of the façade and inside the building. Take a closer look with our guide.

The sculpted decor of the Church of Sainte Radegonde dates back to the 12th century and is incredibly varied. Elements disappeared or damaged after 800 years of erosion were replaced during the restoration work of the 20th century by easily identifiable decorative features.

The northern entrance to the Church is a triptych that can be interpreted as a warning against the dangers of sin and a celebration of virtue.

The left section represents Man consumed by evil. Two dragons stand face to face, symbolising the powers of hell, as a monster gazes upon a reclining sinner, ready to devour her soul. Christ, her only chance of salvation, appears in the centre.

The central section depicts the ways Man can save his soul, shown across the three arches above the door. A group of men pull a rope, the end of which is tied to a lion, symbolising the taming of passion. Acrobats form a human ladder, a symbol of mutual help to reach the kingdom of heaven. Finally, we see the Lamb of God, flanked by angels.

The right section of the triptych highlights the virtues of penance, symbolised by a figure lying face down on the ground and the celestial vine, symbol of the nearby paradise.

The capital to the left of the entrance could represent the biblical scene of Salome dancing before Herod, who offers her the head of Saint John the Baptist as a reward.

A variety of modillions on the chevet and on the other façades include depictions of animals, humans, and mythical creatures.

Inside the church, the capitals are adorned with plants, monsters and birds. To the left of the entrance, you can make out Saint George using his shield to protect a woman from the attack of a dragon. Even at the feet of the small columns, there are sculpted heads and other forms.

Elegant geometrical and botanical friezes surround the windows and punctuate the walls. 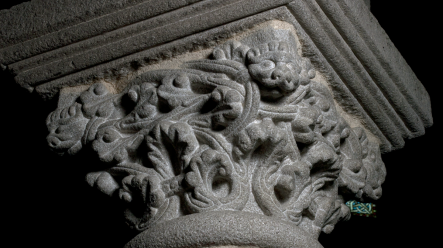 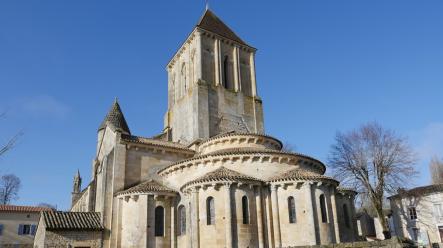