Three coins adorn the town’s coat of arms. These are a reference to the silver mines and mints that prospered in Melle in the Middles Ages. This video will present to you Melle’s medieval mining operations and give you a taste before visiting this very unusual site.

Melle’s coat of arms has three coins on it in reference to the town’s history.
This is because Melle’s subsoil is rich in galena, which is a mineral formed of lead, sulphur and silver. Initially mined for lead, silver has been extracted from the start of the 7th century. Under Charlemagne in 794, the silver denier became the kingdom’s sole currency, soon to be supplemented by the obol. Melle’s silver mines were therefore the most important in western Europe, with estimated production of 4 tonnes per year on average for 400 years.
As it is extremely hard, this rock has to be placed in a fire to extract the mineral. At 400°C, the surface of the rock would break and the miner could remove the weakened pieces. It was using this tedious technique that tens of kilometres of tunnels were hollowed out in Melle and neighbouring towns.
Cleaned and separated blocks of galena were melted in a low furnace to evaporate the sulphur and then placed into an oven heated to almost 1000°C, where the lead was removed using a tool. The obtained silver was poured into ingots and sent to the mint in Melle, which was located where the town centre is today.
There, the silver was flattened, cut and rounded into coins, into which inscriptions were stamped.
In 864, King Charles the Bald limited the operations of mints to 10 workshops in the entire kingdom, including the one in Melle, which continued production until the end of the 10th century.
Nowadays, Melle’s silver mines are open to visitors. Along the tunnels, the subterranean nature reveals wonderful surprises. Two 3D films tell the story of the process of extraction and working the silver into coinage in detail. Scientists from the French National Centre for Scientific Research visit regularly to conduct paleometallurgical experiments, which are explained to visitors, so as to understand medieval techniques. 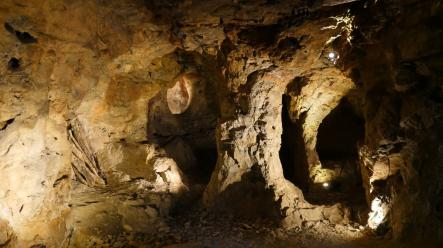 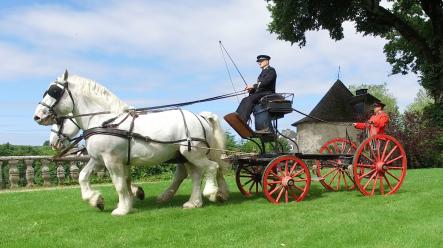 Horse-drawn carriages
Thematic
Activities and landscape
See all the steps