The general organization of the « castle »

What is commonly called the « castle » of Ségur was actually a « castrum » : a fortified village divided into two distinct parts. Discover these parts thanks to this video’s Computer Generated Imagery.

The “castle” was probably set up in Ségur in the 9th century when the Viscounts first appeared, but the majority of the constructions which can still be seen today, date back to the 15th and 16th centuries.
This fortified ensemble had two distinct enclosures : the Viscount’s residence, made up of various buildings to the south, and to the north of the courtyard, reserved for the residences of vassal knights whose role was to defend the site. So it wasn’t exactly a castle, it was more of a “castrum”, or fortified village.
The viscounts’ part, located above the meander, is now in ruins, whereas the area dedicated to knights is located beside the revised residences.

The surrounding wall was made up of residences and a defensive wall, which followed the rock’s contour. Parts of the rampart walkway, such as several machicolations ,are still standing, on the south side today. It is likely that the walkway went all the way around the building. The two closed parts were separated by a moat, which could be crossed thanks to a drawbridge.

On the Viscounts’ side, a postern enabled pedestrians to enter and exit on the hillside, without having to access the courtyard. However, the main entrance to the fortified site was beside the courtyard. This entrance has now been walled-in and was covered up by backfill. After this first door, an outdoor ramp ran along the surrounding wall, guarded by two round towers and there was a second door with an opening in it, at the base of a square tower.

In the 17th century, this access vaniched beneath the backfill, when a major levelling project took place, to gain space along the slopes of the rocky spur. A small defensive bastion was added on, and a new entrance was set up on the northern side. This was the coach door, which nowadays is the main entrance to the castle site. It is accessible via a stone bridge which the lowered drawbridge rested upon. 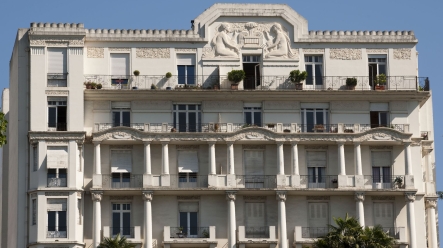 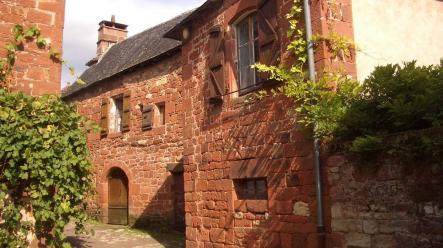 Why is Collonges red ?
Thematic
Habitat and fortification
See all the steps