Pompadour stud farm has kept several horse carriages, some of which are still on display. We interviewed Heritage curator Jean Louis Libourel, who is also a carriage and harness specialist, to learn how they work.

The national stud farms own 350 old horse carriages, France’s largest public collection of horse carriages. Each has a certain number of carriages, for example, here in Pompadour, there are about 30. Other national stud farms also have a fairly large number of them, Cluny and « Haras du Pin » for example.
There are two series of carriages in the National Stud Farms. Carriages which were purchased in the late 19th and early 20th centuries, which were adapted to the farms’ needs at the time, used for horse training and for daily exercises.

One of the national stud farms’ most emblematic and typical carriages is the « skeleton break » : the one you can see right behind me. It’s quite a peculiar carriages : it has no boot, just a very solid and robust axle unit. It was used to train young horses to be harnessed.
They’d put 2 horses, an older one they’d call « school teacher » who was calm and used to being harnessed, with a young one beside it. They hoped that the wise old « school teacher horse » would calm and soothe the younger one, who might want to defend itself or be afraid of the carriage and the noise it made. It might even kick out. The carriage had to be very solid and not have a boot, just in case the young horse might knock it over. These types of carriages were only available from horse retailers and in stud farms.

« Sociable » is a type of barouche, used to carry passengers on a ride through town or in the countryside, when the weather was nice, of course.
They had a front seat for the coachman and a large back seat for important passengers. This seat could be covered by a foldable hood. You could also seat two small passengers up front, usually children, thanks to a a seat which could be installed once you had removed the mobile panel that was covering it up.
This particular type of carriage was built in Paris by the Binder company, Paris’s biggest and most famous coach work company, that relentlessly worked from 1804 to 1939, first on horse carriages, then on luxury car bodywork.

Landau carriages can be used in town or in the countryside. They are closed, like this one, by two joining hoods but can also be opened in front or in the back . This Landau was built in Périgueux by the Dufour company. Dufour is a very important carriages factory that lasted for several generations. They participated in several Universal Exhibitions, namely the one in Paris. It is a rural coach work company with an excellent reputation way beyond rural France. In Napoleon III’s imperial stables, there was a Dufour private omnibus.

Let’s continue our horse carriage journey with this large break, which is the stud farm’s most important car today. This carriage had several purposes, it was used for hunting trips, rides in the countryside as well as in the stud farm itself, for horse training. This carriage was built Trouville by a coach worker named Étienne Bedel.
It is a peculiar estate carriage, with face to face seats in its central part , a door on the side, and in the back, a large upper seat upon ornamental hinges, for domestics or grooms whose job was to help with harnessing.

It was usually called « the great wagonnette » or « body break ». Its uses were multiple : for passengers or transporting different types of material, and also for horse training
It was built in Paris by coach worker Lelorieux.

The private omnibus is a particular type of carriage, found in every national stud farm. It is entirely closed with windows and its door is at the back. It was used to fetch the stud farm’s guests, important visitors, guests who had arrived at the strain station, and who travelled from the station to the stud farm. This carriage was built in Paris by coach worker Lelorieux.
There is also an imperial gallery on its top for luggage and a roof seat for passengers who preferred to sit outside rather than inside the carriage. It was harnessed by either by a pair of horses, or three front horses or by four horses.

Another very interesting and rare carriage in the National Stud farms was the Spider, an American model with typically American features, quite different from European carriages.
First of all, the carriage’s shape : quite arched with very high panels. One distinctive feature was the carriage’s axle unit, with an adjoining beam. This sideways elliptical front spring, set upon the beam instead of on the side, was typical of American carriages.
These carriages were very light weight and were used for extremely lively, fast blood horses, so only used by harnessing fans, people who enjoyed fast horses and speed.

And now for the “tonneau”, or governess cart.

This was quite an unusual carriage for the national stud farms. It was originally invented to transport small children in the castle park, under their nanny’s supervision. The nanny would sit in the carriage’s back right angle. She would be the one “driving” the pony or horse. She had an eye on the children at all times, and this particular type of carriage had different safety features.: first of all, the sides were very high, to prevent children from falling out of the carriage. There were no inner handles, so the door could not be opened by the children, the axle was angled allowing the boot and centre of gravity to be lowered for better road holding. It gets its french name “tonneau” from its rounded barrel shape. .
It was built in Paris by a coach worker named Goisnard, which brings us to the fact that Paris was the carriage work capital for quite a long time, back since the Louis XIV era, but even more so in the 19th century.
Ther are many coach workers in Paris. Some are quite important, such as Binder whose sociable we discussed earlier on.
The National Stud Farms own many carriages from Paris, mainly constructed by Lelorieux. The Victor Lelorieux company supplied many carriages to the National Stud Farms. Right now, there are over 75 Lelorieux carriages in the National Stud Farm. Including the omnibus you can see behind me and the great wagon is also a Lelorieux carriage.
But there aren’t only Parisian carriages, especially here in Pompadour. There were also many carriages from other French regions. In fact, there were coach workers in just about every town in France, and here in there are several carriages from the area : Limoges, Périgueux, Tulle, Auzances, Bergerac and a bit further from Cognac… and it’s interesting to see Parisian models as well as other regional models of carriages. And of course they all evoke the same carriage work trades: coach-builders, carpenters, cartwrights, coach painters, saddlers, harness makers, coach indoor designers… because it took many trades to make horsedrawn carriage. 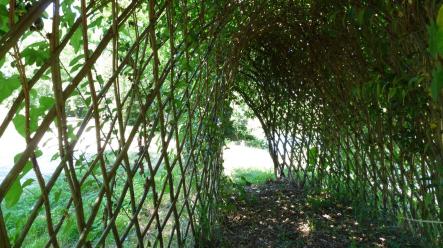 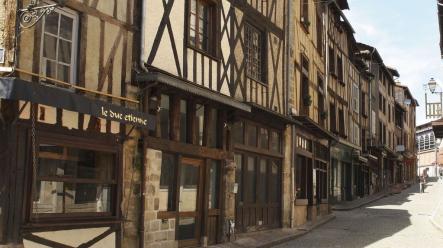 Butcher shops
Thematic
Activities and landscape
See all the steps