Besides its defensive purpose, Les Cars castle was also a luxurious residence, decorated in an early Renaissance style, as you can see here in the inner courtyard. This audioguide and slide show reveal the castle’s treasures.

The castle’s inner courtyard, where you are standing, was lavishly decorated in a Renaissance style. This uncovered area was surrounded by a gallery, with ribbed columns crowned with sculpted capitals. There were animal sculptures atop some of the capitals. A lion bust found on the site can be linked to the capital with claws on its upper part.
The building’s walls facing the courtyard were also decorated with sculpted limestone. There is a woman’s profile sculpted on one of them.
A cartouche, which was probably located above the door lintel, had the Pérusse family arms on it, surrounded by two female characters whose lower bodies lengthen into plant swirls.
Various texts state that the courtyard was also decorated with serpentine plates, which had poems engraved on them. Several fragments of these plates were found during the excavations.
The castle also had Renaissance ornaments on its outer walls, mainly on its machicolations and on its window frames. 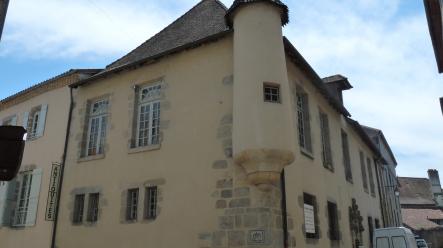