Artists on an island

Today, the castle has been rehabilitated and is a research and creation residence for artists. This video shows its surprising interior architecture and how artists come to work in Vassivière.

In 1977, The Limousin Region acquired Vassivière castle, which became home to associations and hosted exhibitions. In 2010, it was renovated by architects from Berger&Berger and BuildingBuilding. It became a restaurant and an artist’s residence, with a workshop and accommodation.

The architects named the workshop « Notus Loci » , a name that was later given to the entire project. This independent workspace takes up the entire 1st floor, leaving not a trace of the old building’s structure. It is entirely white and bare, which makes it easy to adapt to the residents’ different needs and uses. The tower’s first floor has a glass ceiling, and the ground-floor’s glass wall opens up onto a park.
Notus loci gives artists the opportunity to isolate themselves and develop their artistic projects. But the residence for research and creation’s main purpose is to enable them to meet other artists, and to discover the area and its inhabitants. Film projections, conferences and educational workshops are organized by the art centre, to develop the ties between artists and the people who live in and around Vassivière.

Each residence lasts 4 months and simultaneously greets 3 artists from different backgrounds. Visual artists, filmmakers, musicians, choreographers, landscape artists… with a common interest for the landscape, brought together to share their skills and knowledge.

Between 2012 and 2015, 30 residents worked here, to render their connection to the landscape of Vassivière, in a poetic and artistic manner.

Among these artists, Julien Dubuisson created a sculpture, using the bark of one of the island’s trees, that he moulded.
Filmmaker and visual artist Julie CHAFFORTmade a short film called HOT-DOG, inspired by Vassivière’s lunar landscape in winter. The 30 extras she used for the film, and the musicians were all locals from around the lake. 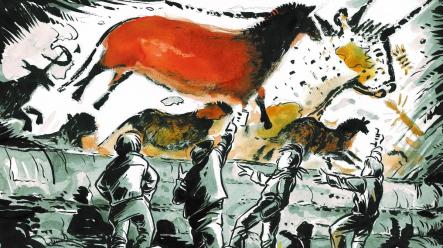