Porte Bergère, one of Le Dorat’s emblematic monuments used to be part of the fortifications which surrounded the town. This audio guide and its slides will help you to fully comprehend Le Dorat’s defense system.

Le Dorat’s first fortifications were probably made of wood and encircled the castrum, around the church and the residence of the Count of La Marche.
Between 1424 and 1431, the chapter abbott Guillaume de l'Hermite had major stone fortifications built to secure the town against the mayhem caused by the Hundred Years War.
The outer wall had towers and four doorways. The only door left is Porte Bergère, in front of you. The other three were destroyed between the 18th and 19th centuries.
Porte Bergère has two massive circular towers surrounding a pathway with machicolations overhead, which were used to shoot assailants. The edifice underwent many modifications over the centuries and is now a registered Historical Monument. The stirrup-shaped arrow-slits date back to the 15th century whereas the « couleuvrinières » openings, for light artillery, were added on in the 16th century, during the agitated Religious Wars era. 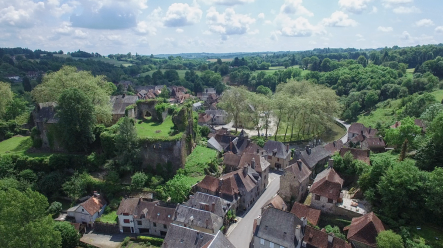 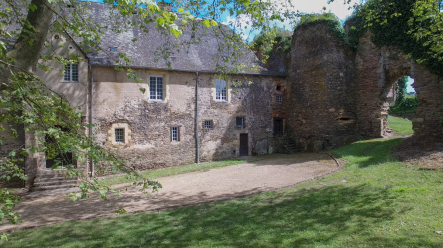 The knights’ courtyard
Thematic
Habitat and fortification
See all the steps