Elements belonging to the Romanesque church portal and tympanum were scattered about during the religious wars, then re-assembled like a puzzle ! Learn more thanks to this amazing video.

This Romanesque portal was added on to the late 11th century church, in the 12th century.
During the 16th century Wars of Religion, it was taken down by the Catholics who feared it might be destroyed. The entrance was walled in, and a smaller side door was built. It was much easier to defend this door against attacks. The tympanum’s (tim-puh-nim) plates were safely placed 10 metres above ground level.
In 1923, while the church was being renovated, architect Louis-Albert Mayeux decided to integrate the plates in the new portal that he planned on making. However, during the repairs, he discovered the original 12th century portal behind a 16th century facing! It was in poor shape but it was almost intact! Therefore, the architect was able to base his project on the original portal.
The limestone tympanum clearly stands out on the church’s red sandstone wall. Its half-relief sculptures represent the Ascension and the Risen Christ, after the Resurrection. In the top middle part, Christ is being taken to Heaven by two angels. Two other crouching angels are by their sides. On the lower part, Virgin Mary is watching the scene, surrounded by 11 apostles. The scenes depicted here are clearly inspired by the tympanum at the cathedral in Cahors.
The two trilobate arches with beaded crossettes supporting the tympanum, are supported by 4 capitals with beaded palmettes. The only original capital is the one on the right, with a bear tamer and bear tied to a rope. The three other ones are copies of the original capital, made when the tympanum was renovated in 1984.
About 30 kms from here, in Saint-Chamant, there is a similar portal, from the same time period as the one in Collonges. 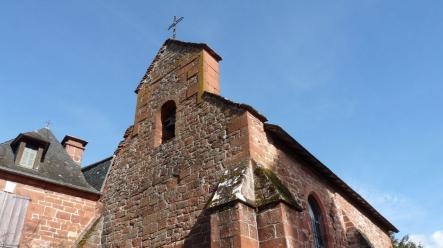 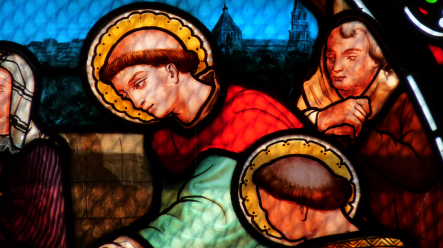