Beaulieu church’s tympanum is a masterpiece of Romanesque art. Observe the detail of different scenes depicted here, and the symbolic of sculpted creatures and characters.

The church doorway tympanum is a Romanesque masterpiece. It was sculpted around 1130-1140. It represents Christ’s rebirth just before Judgement Day.
On the top part, Christ is represented on a cloudy throne, surrounded by two angels blowing trumpets to announce Judgement Day. In the background, four other angels are carrying items related to The Passion and The Glory : a cross, nails, an imperial crown, similar to a crown of thorns. The 12 apostles, members of the future celestial court of law, are divided into 2 groups. Saint Peter on Christ’s right side, is holding the keys to Heaven. On the left, the man with the beard is likely to be a Prophet.
The earth is represented at the apostles’ feet, where Jews and Pagans symbolizing Humanity, witness Christ’s appearance. There are three characters lifting their tunics to show their circumcision, and bodies rising from their tombs as Judgement Day approaches.
On the bottom part of the tympanum, on the lintel, you can see devilish creatures emerging from the jaws of hell. Cross-breed creatures (a winged griffin, a two-headed hydra…) are depicted torturing and devouring the souls of the damned. Beneath, the great serpent with a human head, giving birth to little devils is probably meant to be Satan.
On the “trumeau” (a central pillar supporting the tympanum), there are three sculpted figures representing the three stages of life. The pilasters represent Cluny Abbey’s patron saints : St Peter on the left and Saint Paul on the right.
The porch protecting the tympanum was rebuilt in the late 19th century, and restored in the 2000s, preserving several sculpted scenes on the lateral walls: on the left, the prophet Daniel in the lions’ den and on the right, the Three Temptations of Christ in the desert. 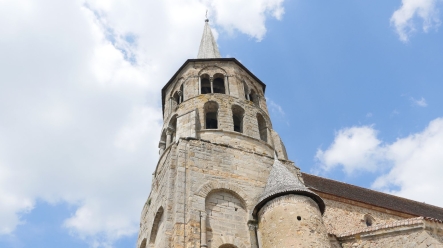 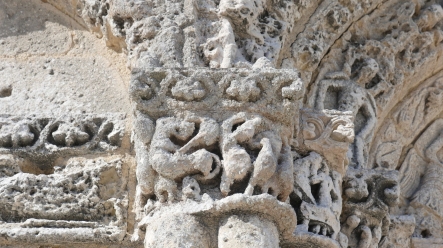