The Maison du Tapissier (Tapestry Weaver’s House) owes its name to the small museum devoted to the trade contained within its walls. Follow the stages in the construction of this 15th century Aubusson house courtesy of this audio commentary.

This building is home to a museum devoted to tapestry making and offers demonstrations for visitors. Bookings can be made with the local tourist office.

It is possible the building dates back to the 15th century and is likely to be one of the oldest in the town. The corner of the house features an overhanging turret seated on a moulded corbel, crowned with a chestnut-shingle-covered ‘pepper pot’ roof topped with a wrought iron weather vane.

Despite the impression of unity provided by the moulded string courses which feature continuously from one façade to the other, the levels of the rooms on each floor are staggered. This suggests that the building was originally two or three separate houses, knocked into one during the 16th or 17th century. The ground level overlooking Rue Vieille appears to have been used for commercial purposes from the outset, with a shop bay window featuring a three-centred arch.

During the 17th century the house was owned by the Corneille family, who were tapestry makers of the royal manufactory of Aubusson, where they did the weaving for the piece entitled ‘The Life of Joan of Arc’, now held at the Château d’Ussé (Indre-et-Loire).

The framework of one of the doors overlooking Rue Vieille features bevelling underneath a tall fanlight. 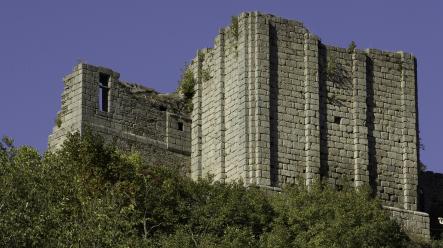 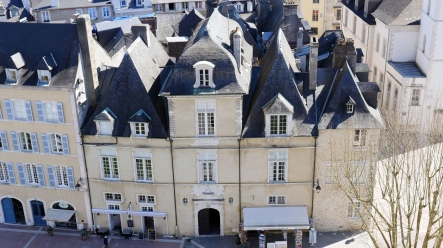 Private mansions
Thematic
Habitat and fortification
See all the steps